The Truth About the Origin of “The Star Spangled Banner” 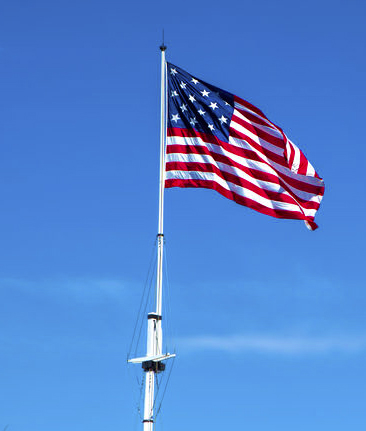 There are many misconceptions today about the Actual Origin of the “Star Spangled Banner”, and the role of the American Flag in the War of 1812. The War of 1812 was about to be lost. If lost, the American Colonies would revert to British Rule. And the United States of America would cease to exist. (The British Army had already burned down the White House.)

There were many ”Prisoners of War” taken by both sides during the War of 1812. Francis Scott Key was a Lawyer in Baltimore, selected by Congress, to negotiate a “Prisoner Swap” with the British. He met with the British Commander, on a British Warship, anchored off the shore of Fort Henry. Francis Scott Key was surprised & pleased that the British Commander agreed to a “One-for-One Prisoner Swap” commencing the next morning.

The British Commander said that the “Swap” was irrelevant. He told Francis to look toward the horizon. Francs saw over 100 black dots on the horizon. The British Commander said that those “Dots” were the rest of the Entire British War Fleet. They would arrive in a few hours to reduce Fort Henry to rubble. Francis said that Fort Henry was also a community for women & children. It would be inhumane to kill them in a random bombardment.

The Commander said it was up to the Americans to determine who & how many would die. The British bombardment would stop immediately, when the Americans lowered the Flag on top of Fort Henry’s rampart. That sign of surrender would end the War of 1812. It would return the colonies back to British Rule. The United States of America would be wiped off the face of the earth.

Francis went down into the belly of the boat to tell the American Prisoners of War (held in the filthiest, inhumane conditions) the conditions of their release. The prisoners all shouted “Never Surrender”. They asked Francis to tell them what was happening at the fort, during the battle. After 3 hours of bombardment, The Flag was still flying on top of the flagpole. The Commander ordered ALL the ship’s guns to be aimed towards the Flagpole. During the next 3 hours of relentless bombardment, the Flag was still seen flying on top of the pole, in the rocket’s red glare.

The British Commander was frustrated and perplexed, “Don’t those Americans understand that they have No Chance. They are dying for Nothing. Their cause is Hopeless.” Yet, in the dawn’s early light, that Flag was still there. (Francis Scott Key then wrote “The Star-Spangled Banner”.)

The British Commander didn’t understand Washington’s Proclamation, “An American would rather die standing, then live kneeling, before an enemy taking away his Freedom.” In the morning, Francis took a boat ashore to see why the Flagpole was leaning at an odd angle. Francis found the bodies of dead Americans stacked up against the pole. They were killed holding up the flagpole, during the bombardment, allowing the Flag to fly on top.

Truly, America was “The Land of the Free, and the Home of the Brave” . Those dead Americans were the functional expression of Washington’s Proclamation.

The “Victory at Fort Henry” eventually allowed Andrew Jackson to Win the “Battle of New Orleans”, which ended the War of 1812, and preserved the United States of America.

It’s a pity that Social & Mainstream Media are ignorant of the actual ”Origins of the “Star Spangled Banner” and the significance of the American Flag. If they knew, they wouldn’t Kneel or Raise a closed fist, during the singing of the “National Anthem”. Or spit on, or burn the Flag, abusing the very Freedom that the Flag provides – Earned by the Sacrifice of American lives defeating Tyranny in the Revolutionary War, The Civil War, and WWII.

It’s also an act of Love.

This YouTube music video of Ray Charles singing “America the Beautiful” describes an America worth fighting & Dying for.

Once the Origin of the Star-Spangled Banner is known, an American will dutifully place a hand over their heart, and either sing the National Anthem, or bow their head in gratitude for those who died for it.

Those who died to provide Freedom of Speech to others, certainly deserve no less.