The Kissmobile: A Painful Separation / A Joyful Union 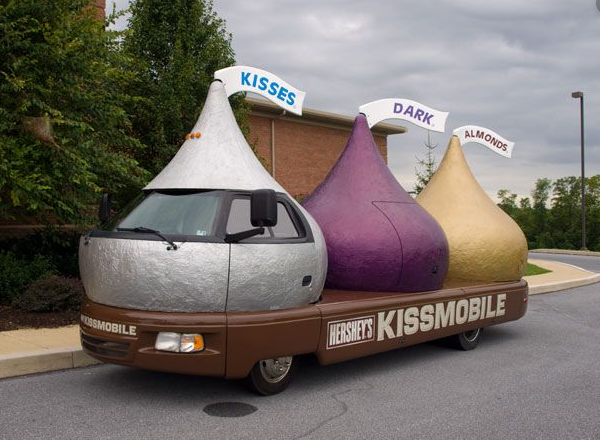 It was a very large, old apartment. It had plenty of living space, including a large room perfect for parties. Its age demanded duct tape around the windows to block winter’s windy blasts, and space heaters to mitigate the cold that overwhelmed the radiators.

The Hershey Chocolate Company had 2 “Kissmobiles”. One for the major cities East of the Mississippi. The other, for the West. The “Kissmobile” was a long, flat-bed truck, with 3 large Hershey “Kisses” mounted on the flat-bed. The 1st Kiss was a standard 2-person, driver’s compartment.  The 2nd Kiss contained a large video screen that explained the Kissmobile’s Charitable purpose.. The 3rd Kiss was a big refrigerator storing lots of Hershey Kisses and other chocolate candy, which would be generously given away.

Both employees were dressed in “Hershey Kiss” costumes, handed out candy and gave interviews to the Press. The Kissmobile was quite successful in raising donations, and was an effective Public relations ploy for Hershey.

The above YouTube Music video expresses the essence of my friend;s son’s feelings for his New Kissmobile Partner

Hershey appreciated the ingenuity to generate additional exposure & donations. Hershey was  unaware of their free lodging & meals, so it kept paying the employee’s contractual  “Per-Diem” meals & lodging pay. The son & his girlfriend saved their “Per Diem” money for their weekends off. They stayed at the best 5-Star Resorts throughout the West, enjoying the sweet life (La Dolce Vita), provided by the “Kissmobile”. The “Kissmobile was responsible for nurturing their relationship from courtship, through engagement, and to marriage.

The Above YouTube Music Video Ice Dancers Capture the Essence of the “:Courtship Dance”: The Woman, Vulnerable & Loving. The Man, Strong & Supportive. Both dancing Harmoniously Apart, then becoming a complimentary “ONE”.

When my friend’s son returned from Hershey’s Western Public Relations tour, he was solicited by an International Public Relations firm, which led to a lucrative Vice Presidency.  That job allowed him to get married. On their Wedding Day, the Bride’s father arranged for the Kissmobile to park in front of the Church. The photos from the local media, of the newlyweds leaving the Church, got national exposure.

Dating works in mysterious ways. One girl’s broken engagement leads to another girl’s marriage. My friend’s son & wife celebrated their 15th Wedding Anniversary with a dinner. Family & friends sat at tables, with a picture of the newlyweds standing next to the Kissmobile, in front of the Church.

Its been “La Dolce Vita.” ever since, as their hearts go on, and on…