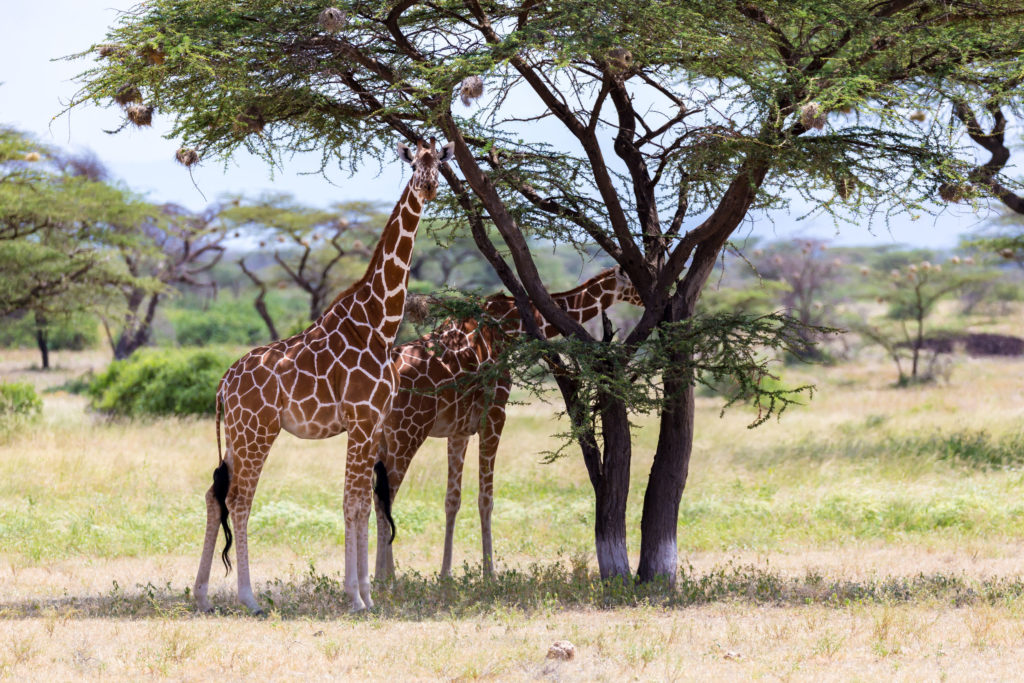 My friend’s daughter loves Disney World, from the age of eight to her present age of 45. A few years ago, her entire extended family joined her to spend a week in Disney World, spending a day in each theme park.

The “Animal Kingdom” Theme Park is a large Nature Preserve of wild animals in their natural habitat. A long, wide wooden pier extends hundreds of yards into the preserve, which protects the viewers, while not disturbing the animals. (There are no noisy motorized vehicles or mechanical devices in this part of the preserve.)

After lunch in the “Animal Kingdom’s” restaurant, the family members ventured into the middle of the preserve, at the end of the long pier. My friend’s granddaughters, then ages 9 and 6, were particularly fascinated by the giraffes. They were mesmerized, watching the giraffes nibble at the tree-top-leaves, and then bend their long necks down to drink from the pond below. The giraffes leisurely repeated that process to the delight of the grandchildren.

My friend then asked them, “Why didn’t the giraffe’s head explode when it bent down to take a drink?” His granddaughters looked puzzled. The younger one asked, “Why would its head explode?” The Professional Park Attendant began to inch closer to the group.

My friend explained, “The giraffe has a very large heart, which it needs to pump the blood all the way up to its head when its nibbling the tree-top leaves. Its heart is like a massive, powerful pump. And its heart keeps pumping, continuously.” The Park Attendant nodded her head in agreement.

“So, when the giraffe bends down to drink, its powerful heart keeps pumping blood, which should flood its head, causing it to explode.” The children’s confused looks indicated that they understood the problem. The younger one asked, “So, why doesn’t it head explode?”

My friend explained, “It doesn’t, because its neck has a very complex, series of strong valves that begin to close as the giraffe’s neck begins to bend downward. That system of closing valves is so precise, that the amount of blood in the giraffe’s brain remains constant when its nibbling tree-top leaves, as when it’s taking a drink from the pond below.” The older granddaughter shouted, “That’s amazing.” The younger one screamed, “Wow.” The Park Attendant said, “Your Grandpa is correct.”

“Equally amazing and wonderful is the complexity of the bird’s wing. All animals with feathers need them to keep warm. Except the feathers of a bird’s wing. A bird’s wing is a very complex structure of hooks and other things that allows birds to fly”, explained my friend to his grandchildren.

He continued, “More amazing, are your eyes and ears, which are a complex combination of nerves and sensors that are coordinated with your brain so that you can see and hear. And most amazing, is your DNA molecule with a precise combination of amino acids in a long chain of other atoms that makes you the unique person you are. There are seven billion people on earth, all different from each other, because each DNA molecule is different from each other. Isn’t that amazing?”

Their mother, who is a doctor, nodded in agreement.

That day in Disney World, my friend’s granddaughters learned that the irreducible complexity found in living things is not the result of random chance through time. It’s the result of God’s profoundly intelligent design. They learned what atheist/evolutionist, Gould, admitted, “The irreducible complexity found in organic things cannot be explained by random chance through time.”

Gould created the term, “Punctuated Equilibrium”: “Some complex things just appear fully functional, with no scientific explanation or basis.” Gould’s explanation is as nonsensical as “Abracadabra.”

Disney World is a wonderful, magical place, the product of incredible imagination.

That’s a lesson some adults refuse to learn, but children intuitively understand.