A Father Will Do Anything for His Family

One family funeral was almost followed by a another, the next day.

My friend’s father-in-law passed away from the dual demons of cancer and heart disease. The man met the challenges of outrageous career ending financial devastation, followed by severe, painful medical problems, with inspirational grace and courage.

My friend was honored to be chosen b 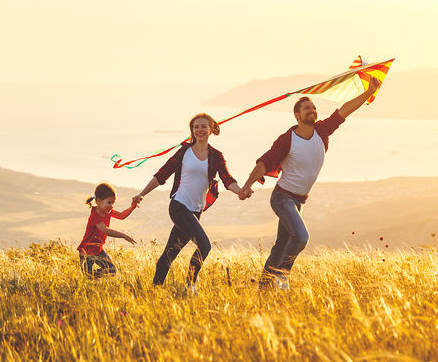 y the deceased’s family members to give the eulogy at his funeral. My friend and his family attended his father-in-law’s wake the entire Sunday before the funeral. He attempted to remember the flood of significant personal stories of the various friends & relatives to provide the spine & essence of his remembrance the next day.

After everyone left, late at night, my friend, his wife, and 2 young children began their hour-long trip home. Exhausted, his family was fast asleep in the car. His wife in the front passenger seat; and his son & daughter lying on the back-bench seat (Before child-safety restraint Laws) The last 2 cups of coffee kept my friend’s eyes open.

Fortunately, there were no cars on the expressway. A few miles from home, my friend was driving in the middle lane, when he noticed a car parked on the right emergency lane. That car put its lights on as my friend passed it. (My friend wasn’t speeding, so it wasn’t a cop.) But, when my friend looked into his rear- view mirror, he saw that the car was accelerating at a high rate of speed, towards him.

My friend stepped on the gas. The other car went faster. My friend knew this part of the expressway very well. He knew that the next off-ramp, past the one coming up, was 8-mles down the road. As he was almost past the near exit ramp, my friend slammed on his brakes, and made a sharp right turn onto the curving exit ramp. His wife lurched forward, safely restrained by her seat-belt. The 2 kids in the backseat flew against the cushioned back of the front seat. Everyone was screaming. No one was hurt. Fear filled the car.

Thankfully, he saw the car following him speed past that exit ramp. However, a few moments later, he looked in his rear-view mirror and saw that the other car was backing-up on the expressway, to come down the same curvy exit ramp. Now, my friend’s mind was racing. Only a crazed maniac would back-up on an expressway. He knew that the nearest police station was several miles away. He knew that he couldn’t elude the crazed driver stalking him. So, he pulled into the well-lit gas station at the bottom of the exit ramp, in front of the door to the store.

Instinctively, my friend knew that he couldn’t let that crazed driver approach his car with his family inside. So, he got out and stood far away from his car. The crazed driver got out of his car and faced my friend, like a gunslinger in an “Old West Movie Shoot-Out Scene”.

Th above YouTube  music video captures the Tension between the “Crazed Driver” & My Friend as they faced-off in the gas station parking lot:

The crazed guy got back into his car, made a right turn onto the city street, and sped away. It was over. My friend didn’t know what the crazed driver was “On”, or was going to do. My friend just knew that whatever it was, he wanted it to happen far away from his family.

When things calmed down, he hugged his family, explained what happened. He reassured them that nothing nor no one would ever hurt them. He told them that a father will do anything to protect his family. When they got home, he spent a little longer tucking everyone into bed, including his wife. He waited until everyone was asleep.

Then, he thanked God that everyone was safe. He also thanked God for the clarity of mind and courage of heart that allows a father to do anything to protect his family.

Women & children rely on that.