My friend developed the 4-color post card (below) as a result of a small group Bible Study discussion. One group member commented that he first told people about how much Jesus loved him when he was six years old. However, as he grew older, he became more reluctant as he became more concerned about what people would think of him. 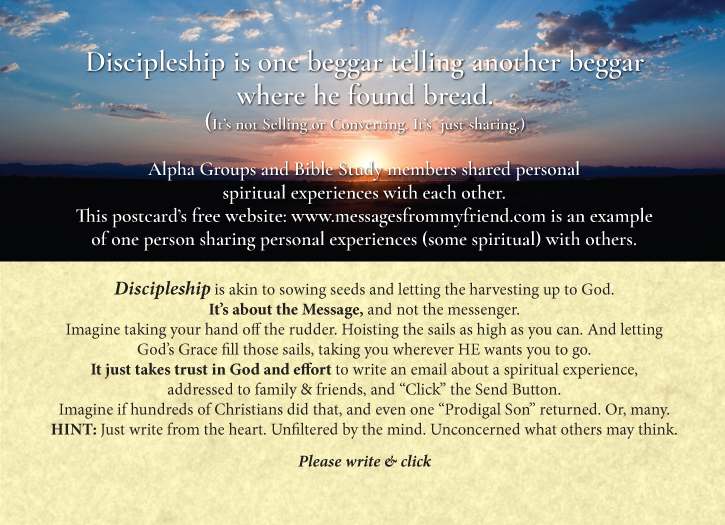 My friend admitted a different problem with “Discipleship”: Pride. My friend freely told others about the “Gospel Message”. But upon reflection, he realized that his “Discipleship” was more about the messenger than the message. He violated Kipling’s advice, “Not to look too good, and nor talk too wise”.

He realized that there were only two times in his adult life when he was like that 6 year-old boy.. Both times were previously reported in prior blog posts: “Reflections at Time of Passing”, which assuaged the grief of parents whose daughter died 3 days before her Wedding Day. And, “The Buddhist Tonglen Prayer, with Christian Values”, that returned joy to the life of a bitter, angry divorcee.

With tears in his eyes, my friend confessed that, “Only twice in my adult life was I like that 6-year-old boy. The rest of the time was all about me.”

My friend attempted to expand the role of “Discipleship” among his fellow parishioners by mailing the above postcard to encourage church members to write an email about a spiritual experience, address it to family & friends, and “Click” the Send Button.

He also used his personal example of creating a free website: www.messagesfrommyfriend.com as one person sharing personal experiences (some spiritual) with others.

To lessen reluctance of personal rejection, my friend reminded parishioners that Discipleship is akin to sowing seeds and letting the harvesting up to God. It’s about effort, not outcomes. The outcomes are up to God.

My friend also provided the advice of the great Russian dancer Nureyev. When asked “What is the secret to your great dancing?” Nureyev said, “I dance best when I just dance. I dance worst, when I peek at the audience to see how I’m doing.”

My friend mailed this postcard to members of his Church, and encouraged them to email it to their family & friends, who may forward it to their family & friends, and so on. He also mailed the post card to other Christian Churches to encourage them to adapt it as a bulletin insert, or website link, or mailer, or whatever. And encourage their members to forward the card’s message to others.

Actually, This Blog Post Discipleship Plan is Not an Impossible Dream as Sung in the Above YouTube Music Video

Modest cost and effort will result in a great reward. It’s “Discipleship ROI” on steroids.