My friend lost everything he had, in an instant – like Job, in the Old Testament. Nefarious maneuvers by greedy investors stole his “Intellectual Property” – Worth Millions of Dollars – which closed his business. In one day (after the Sheriff served him with a “Cease & Desist” Court Order, because the Master Distributor’s Bankruptcy voided my friend’s 6-Stae Distributorship) my friend lost all of his income, money, and assets. He was broke. 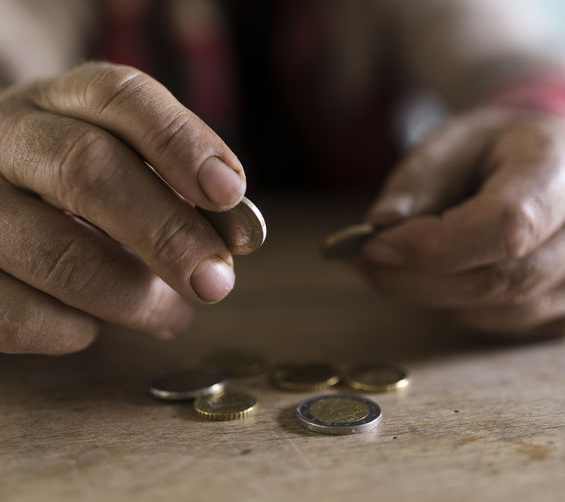 A week before Christmas, during the painful, personal, financial adjustment period, he was in Mac Donald’s about to order a breakfast value meal. The $5 in his pocket was all he had for the day.

The man next to him at the counter was fumbling in his pockets, looking for money. Some coins fell to the floor.There were a few crumpled dollars, along with some change, on the counter.

The next thing my friend knew was that he was bending over, with the crumpled 5 dollar bill in his hand. He tapped the father’s shoe. The father looked down, and my friend asked, “Is this what you were looking for?” My friend handed the father the $5, and said, “This fell out of your pocket during your scrambling search.” Their eyes met. Nothing was said. The father’s tear was enough gratitude.

My friend left, without ordering breakfast. It was the only money he had. Funny thing, he didn’t feel hungry. He felt good. He didn’t know why he did that. He didn’t plan on doing that. He recalled Christ’s comment about love: “By this, shall all men know that you are my disciple, if you love one another, as I have loved you.” (unconditionally)

My friend thought that, if Christ could hang on a wooden cross for 3 hours, bloody and beaten, as the perfect sacrifice for the forgiveness of ALL sins, then the sacrifice of $5 was the least he could do. By the way, the word “Sacrifice” does not mean: “Loss”.

The word “Sacrifice” comes from 2-Latin words: “Sacri / Faciam”, meaning: “To Make Holy”. In some small way, giving that father $5 for his sons’ breakfasts, was Holy. Sharing something, whether from surplus or need, is Holy.

Sharing something, without asking anything in return, is also an ACT OF LOVE. That’s the essence of Christ’s Mission on earth, beginning with His Birth in Bethlehem, and repeated by Christians every Christmas Season, thereafter – like my friend at Mc D’s: “Loving one another, as Christ Loves us”.