A summary of St. Paul’s Letters

A Life of Participation in Communion with God’s Love – A summary of the “Letters of St. Paul”, by Richard Rohr 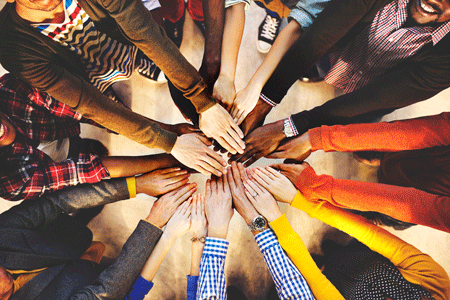 The power and value of St. Paul’s letters is that they are a transformational experience of his relationship with God – participation in the Mystical Body of Christ – participation in a corporate personality bigger & stronger than himself.

Paul was a devout Jew, who strictly obeyed “The Law”. On the road to Damascus to arrest more Christians, he was blinded by a bright light and heard a voice say, “Saul, Saul, why do you persecute me?” I am Jesus, the Nazorean.”N.B. The pronoun: “Me” was the life-changing distinction. Paul was persecuting people who believed in Christ.

For Christ to make no distinction between Himself and those who believed in Christ, was transformational for Paul. Belief in Christ was the same as sharing the life of Christ – the same as Christ being in the life of the believer. It was the basis of Paul’s analogy of the Mystical Body of Christ.

We are acquitted of our sins by belief in Christ’s death. By belief in Christ’s resurrection, we are reconciled into the life of God. As worthless broken branches, we are re-grafted into the life-giving vine of God. As such, God’s love flows though us, to others. That is the wonderful dynamic of the Mystical Body of Christ. God’s unilateral gift of love to one part, is shared with each other part. There is a corporate, cosmic unity to the Mystical Body of Christ.

More incredible, was Christ choosing Paul, a sinner (a hateful murderer), to be His “Apostle to the Gentiles”. Paul understood that he did nothing to deserve that selection, which led to his theme of “Grace”. (Grace is the Gyroscope for our soul.) Grace means free gift. We do nothing to earn it. Grace is not performance based. God loves us as we are – imperfect sinners. Paul states, “just as the first Adam separated us from God, so the second Adam redeemed us.” Our redemption was nothing that we earned by keeping Laws (Galatians). Keeping Laws and doing good deeds doesn’t make God love us. God already loves us, so He sent His Son, to reconcile us with Him.

Paul eschews the notion of meritorious “Ladder Theology” – that we climb to heaven by the performance of good deeds and adherence to Laws, to make us worthy of God’s acceptance. Our culture believes in Pavlov’s paradigm: Stimulus /Response /Reward: If we work hard, and produce good results, we get our reward. It’s a quid-pro-quo system based on performance & justice. Christ’s death & resurrection turned that paradigm upside-down. Christ knows we are guilty, and acquits us, anyway. This is counter intuitive to the performance principle. It is God’s unconditional love, not performance & justice, that hung on the Cross. Paul acknowledged the guilt and futility of “Ladder Theology” when he wrote, “When I what to do good, I don’t. And when I want to avoid evil, I do it anyway.” – (Romans). Paul’s transformation came from his experience of God’s love, not Paul’s worthiness.

Paul knew that the Old Testaments’ bi-lateral covenants were broken by humanity. Christ’s New Testament covenant is unilateral love. Paul wrote his letters without the benefit of reading the gospels, which were written later. Paul never knew about the thief, crucified with Christ, who said, “I deserve my punishment, because I led an awful life. You don’t deserve to be crucified, because you are a good man.” To which Christ replied, “This day you will be with me in Paradise.” Paul didn’t know that Christ prayed for His executioners, “Father, forgive them for they know not what they do.” Paul didn’t know that Christ told the synagogue official, whose child had died, “Be not afraid. Just have faith”, and the child lived. Or, that Christ’s parable about the “Prodigal Son” is about mercy, as is, the parable about paying laborers the same for different performance. That’s the Paschal Mystery.

The hardest thing to do is to accept that God accepts us, “As Is”. God knows we are guilty, then acquits us, by Christ’s death. We become a “new creation” – children of God – heirs to heaven by Christ’s resurrection. As such, we will love God, and others, as much as we allow God to love us. Or the reciprocal, we will love God as much as we love someone else the least. The dynamic of the Mystical Body is to allow the “vertical” love of God to flow “horizontally” through broken vessels to each other, whose love, in turn, flows back to God, and so on and so on. We share God’s love because we want to, not because we have to. We love God out of gratitude, not out of the fear of punishment.

This transformational conversion experience of living “In Christo” results in “suffering and death”. Paul speaks of dying to the old-self. The old-self is selfish. It’s petty and needy of admiration and affirmation though praise of achievement – through the acquisition of things. The old-self is defined by persons and things outside of itself. It’s fragile, because its validity is determined by changing life situations. Paul turns that cultural notion upside-down. Our value comes from the life of Christ within us.

We are made by God, and for God. Until we understand that, life won’t make sense. By dying to selfishness, we experience the presence of God within us, and live “In Christo”. The “old-self” is powerless against “Powers and Principalities”. The “New Creation” in Christ, triumphs. When we suffer reversals by rebellion (sin – “kicking against the goads”), we will gain renewal through participation.

Participation in the Mystical Body of Christ shares in the Pascal Mystery of death & resurrection, of loss & renewal. By Christ sharing in our humanity, our humanity shares in His Divinity. Not by doing what is right, nor by knowing (Augustine wrote that Satan knows the creeds of the Church), but by experiencing the presence of God within us. The Mystical Body of Christ is a bunch of broken branches re-grafted into the life-giving vine of God. It’s the progeny of Christ’s unilateral covenant of unconditional love.

The Sanctuary of our Soul experiences God’s Love (not by keeping Commandments or doing good deeds) by the humble acceptance & patience of being in Communion with God.